COMMENTS: 2010 was a year of excessive spending on nail polish for me. Of course, I already had a large collection, but I've been collecting nail polish for over 10 years, and in the last year I managed to acquire more than 5 times that amount, with only about 20% of them having been worn. I can't say I'll never buy nail polish again, sooo...

Enter my new incentive - Walking for nail polish.
I figured I could kill two birds with one stone - deal with my level of "unfitness" AND seriously curb the nail polish spending. For every mile I walk on the treadmill, I get $1 to spend on polish. Those of you who run probably think that's generous, but since I really dislike running, it makes sense for me. I started prior to Christmas and you can see my progress tracked in my spreadsheet.

(See how my stash multiplies? I just added five more - not counting the backup pack!)
I was tempted to jump in on the Zoya freebie and Barielle free shipping offers, but knowing I didn't have the miles at the moment, and that I already have $6 earmarked for an OPI DS that I want, I just couldn't.
I must now think before I buy, which I'm enjoying. I think after the OPI, I might aim for some more Nfu Oh flakies (I have only two now). At almost $13 each, I'll be walking for a while! Gotta put that money in the "bank" and get more active while I'm at it! 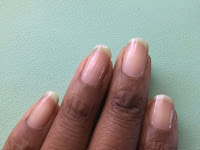